"Small towns have their own heartbeat, no matter how many people come and go." -unknown

PLEASE NOTE: The interviews will be open to the public and will take place at the Kimball Transit Center, 233 S Chestnut, Kimball, NE.

The City of Kimball, in partnership with search firm Baker Tilly, has announced the two finalists selected for interviews as the search for the next City Administrator continues. The finalists, Annette Brower and Patrick Davidson will be interviewed by the Mayor and City Council on Saturday, October 16.
Annette Brower currently serves as City Clerk/City Treasurer for Kimball and has previously served as the Interim City Utilities Administrator. Prior to working with the City of Kimball, Ms. Brower worked for Kimball County, the State of Nebraska DMV Kimball, Fort Collins Police Department and Ventura County Sheriff’s Department. Ms. Brower received her degree in Accounting from Western Nebraska Community College.
Patrick Davidson worked in municipal government in Gillette, Wyoming over the past six years. During that time, he served in the roles of: Assistant City Attorney, City Attorney, Interim City Administrator, and City Administrator. Prior to working with the City of Gillette, Mr. Davidson practiced law throughout the State of Wyoming. Mr. Davidson received his Bachelor of Science Degree in Economics and Political Science from the University of Wyoming and his Juris Doctor Degree from the University of Wyoming, College of Law.
The City Administrator is responsible for providing strategic leadership and direction for overall City operations, carrying out the policies and ordinances of the City Council, coordinating with the Mayor, and directing the administrative functions and operations of various City departments. It is the intent of the Mayor to have a candidate selected and approved by the end of October.

The City of Kimball would like to remind all Kimball residents of the newly passed Ordinance No. 789 on June 15, 2021, in regard to street parking prohibitions. Section 1 – B of Ordinance No. 789 states that recreational vehicles, campers, cabin trailers, motor homes, boats, personal watercraft, and utility may not be parked on public streets within the City of Kimball from October 1st through March 31st.
Violators of this ordinance may be issued a citation, ordered to remove the violation and/or be subject to towing of the vehicle by the City or its agent
If you have any questions or concerns, please feel free to contact the City of Kimball office at 308-235-3639.
Thank you for your understanding and cooperation.

UPDATE: BEGINNING MID TO LATE NEXT WEEK (SEPT. 20-24, 2021) CREWS FROM HENNINGS CONSTRUCTION WILL BE RELOCATING ON THE WATER LOOP PROJECT TO MAKE IMPROVEMENTS TO 4TH STREET.
THIS WORK WILL BE IN THE AREA OF BURG STREET, CEDAR STREET AND LOCUST STREET BETWEEN 4TH STREET AND 5TH STREET. WORK WILL CONTINUE UNTIL THE PROJECT IS COMPLETED. IT IS ESTIMATED TO LAST UNTIL THE END OF SEPTEMBER.
DURING THIS TIME, STREETS MAY BE CLOSED DOWN TO ONE LANE, HOWEVER NO FULL CLOSURES ARE EXPECTED.
INTERMITTENT WATER SHUT-OFFS MAY OCCUR BUT WE WILL NOTIFY RESIDENTS IN ADVANCE AS ALLOWED.
PLEASE BE AWARE THAT CHLORINATION FOR DISINFECTION WILL CONTINUE TO BE USED AS NEEDED AS THEY WORK ON THE WATER LINES. IT MAY CAUSE A SLIGHT CHLORINE RESIDUAL BUT WILL ONLY BE TEMPORARY.
WE APPRECIATE YOUR PATIENCE WHILE WE WORK ON UPGRADES AND WILL UPDATE RESIDENTS ON CHANGES AS THEY BECOME AVAILABLE.

The City of Kimball has been advised by our power supplier, Western Area Power Administration (WAPA) that they will be shutting down electricity to the City for 1 day in September while they make upgrades to their substation. The planned date is Tuesday, Sept. 28th from 7am to 5 pm.
We are asking all businesses and residents to prepare in advance for electric disruptions. The City will be generating power during this day with our City Power Plant to supply backup power, however, we cannot guarantee there will always be power to all areas and to expect that there will be likely disruptions throughout the day. The City urges all residents and businesses to conserve as much energy as possible during this outage, to protect sensitive equipment and computers and to unplug any unnecessary devices and equipment.
We will continue to update the public of any changes to dates or time. Thank you in advance for your patience during this time of inconvenience.

FOR IMMEDIATE RELEASE September 2, 2021
The City of Kimball Water Department will be doing a preventive maintenance chlorination of the storage tank and the water system starting Tuesday, September 7, 2021.
Due to this process, please expect some chlorine taste and smell in the water. There will be some chlorine residual in customers’ water but should only last temporarily. The water will be safe to use for drinking, cooking, and cleaning as usual.
Customers are asked to contact the Kimball City Office at 235-3639 with any concerns or questions.

Notice from the Kimball Municipal Airport

TO ALL TENANTS of the Kimball Municipal Airport KIBM

Runway 10/28 will be closed approximately from May 2022 through December 2022.
The runway has started to shift over the years and last year we had a heave and had to
do repairs.
It was determined by engineers and the FAA that it needed to be replaced completely.
The repairs will begin approximately May 2022 and are estimated to be completed by
the end of 2022.
We apologize for the inconvenience this may cause. Any questions please direct them
to Ryan McElroy, Kimball Municipal Airport Chairman
Thank you for your understanding and cooperation.

In order to conduct business at hand and to fill the vacancy that was past the statutory
deadline, Ms. Warner was sworn in by official oath on July 1, 2021, at the City of Kimball City Hall Clerk’s office. 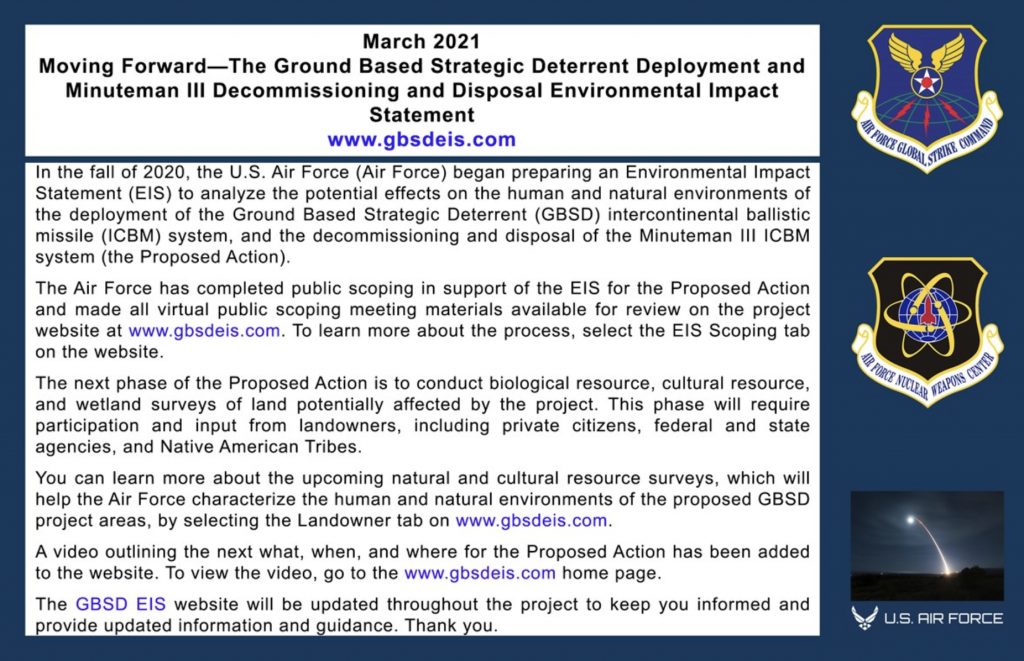 In January 2019, the Chamber hosted a meeting with the Greater Cheyenne Chamber and local businesses discussing the future of the Defense Department’s Ground Based Strategic Deterrent project (GBSD) and the business opportunities for local vendors to become a part of this project. The GBSD project that will be based out of Cheyenne Warren A.F.B was confirmed on Friday in a news release.In June 2019, a representative from one of the ‘potential’ project developers, Bechtel Corp., visited with the City Administrator regarding project housing for onsite engineers and crew members. Bechtel is a global engineering management company that works in multiple markets including nuclear and security. At the time of this visit, they were inquiring about options for possible locations within the City limits of Kimball. Housing would be for 2000 employees for approximately 4 years. There was no timeframe discussed as all of this was still in the early stages of the Defense Department’s decision on choosing their vendor between Northrop or Boeing.In February 2020 Northrop announced they added Bechtel to their team for the GBSD project.In June 2020, the City Administration reached out Bechtel to let them know the City of Kimball welcomes them back for discussions on what their future needs may be. The response received was positive, the Bechtel Corp is still interested in working with Kimball and will be in touch with our City leaders once the project moves forward. Again, there was no time frame given as the project has just been announced. We will be certain to keep the community informed of any developments as they present themselves.For more information on the project, to register your business or to sign up for updates visit:

The Municipal Energy Agency of Nebraska (MEAN) is the wholesale power provider to Kimball, so as a customer of their utility, any commercially metered businesses/municipal buildings/schools in town are eligible for our LED lighting incentive program (the application is attached). A couple of items to note are that the program is limited to existing indoor fixtures and the maximum incentive per customer per program year is $2,500 (the program runs with MEAN’s fiscal year, April 1-March 31).  If you hit the $2,500 ceiling during this program year, you would be eligible for $2,500 on an additional project(s) after April 1, 2021.

MEAN now has three residential energy efficiency programs available – incentives for smart thermostat installation, cooling system tune-ups and for attic insulation. The attachments would be too large to email, but all of the information including flyers and applications can be found on the energy efficiency page of our website: http://www.nmppenergy.org/mean/energy-efficiency. 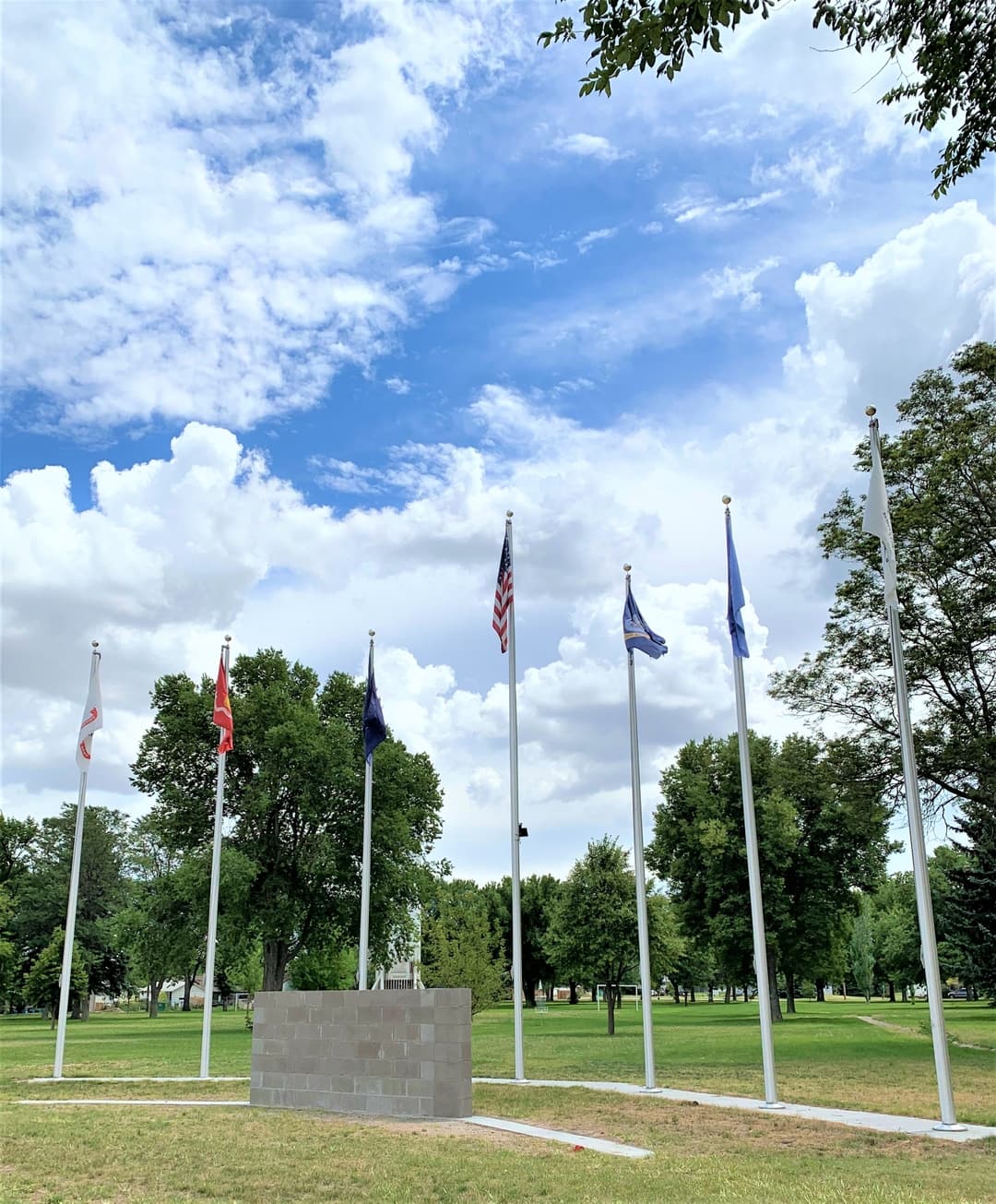 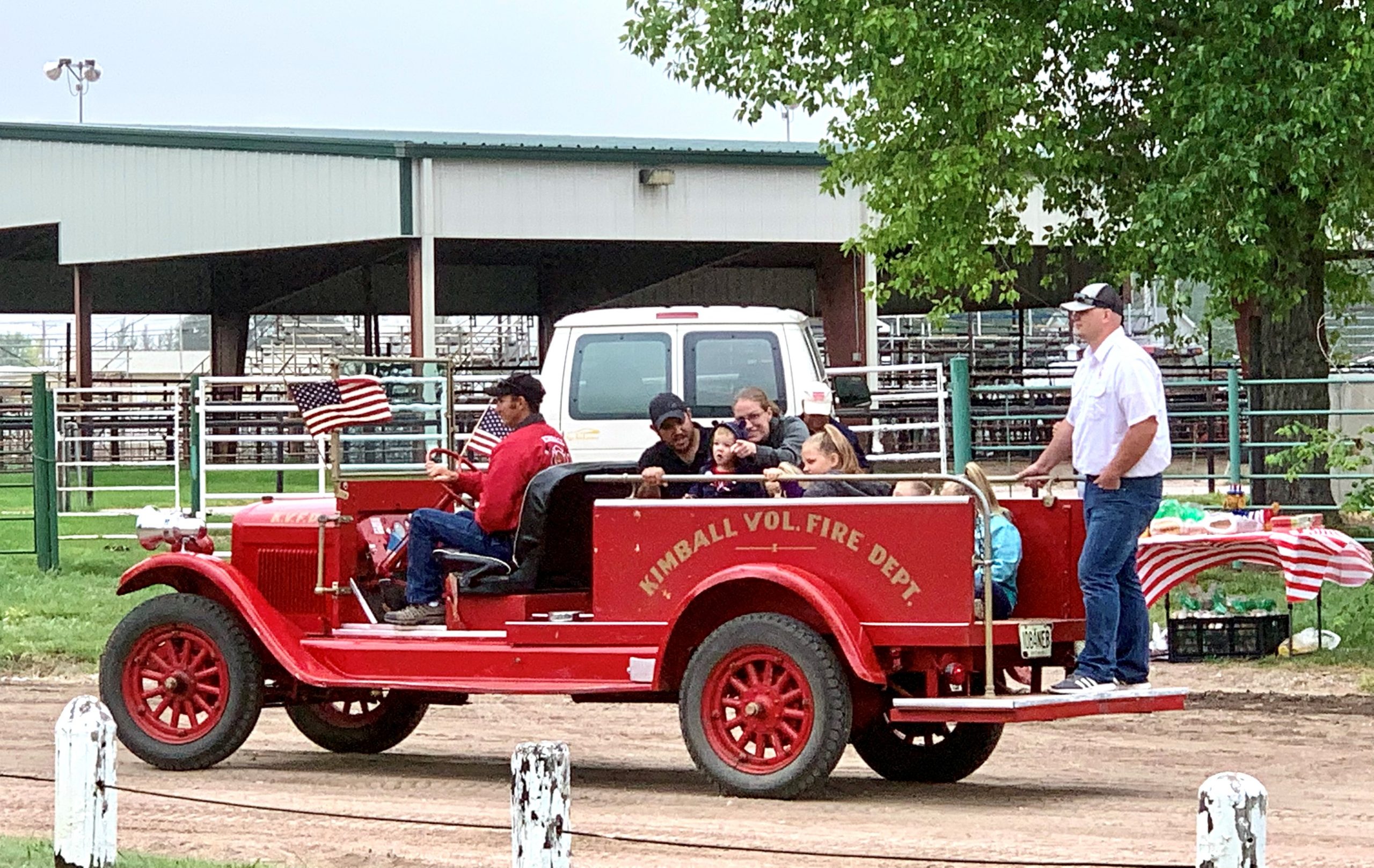 Enjoy our community and share moments with neighbors and visitors. See our upcoming events below.
To submit an event to the calendar, email: info@kimballne.org. 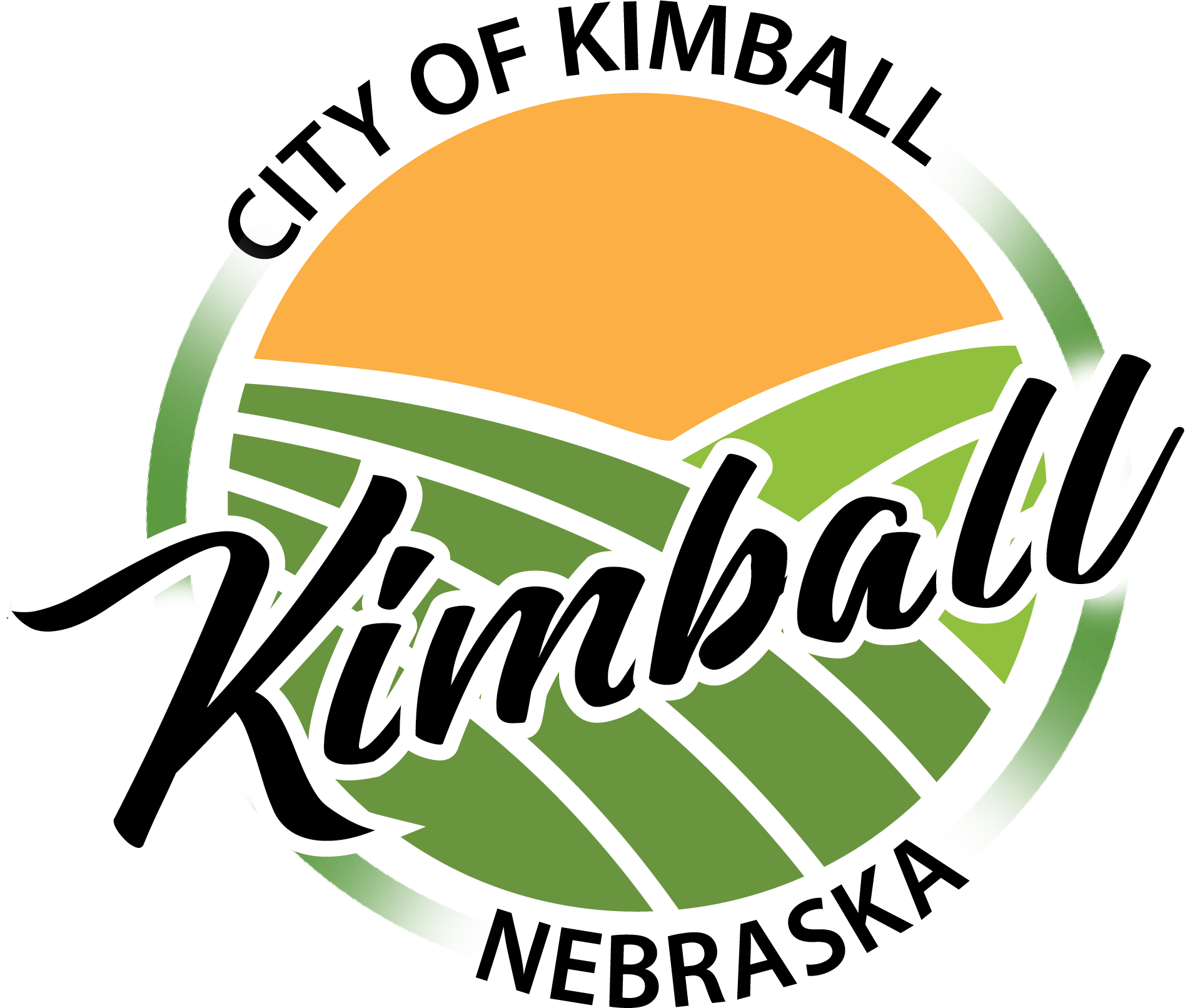 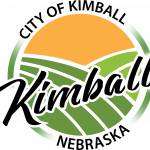