"History is not a burden on the memory, but an illumination of the soul." - John Dalberg-Action Area amenitiesUpdates & Events

A Past on the Prairie

Kimball was established about 1870 by the Union Pacific Railroad, a little settlement of adobe shacks to house the workers, and a water supply for the steam powered locomotives and residents of the area. Because of the prevalence of antelope, the town was known as Antelopeville.

Mother Lynch, wife of the railroad section foreman, cajoled the company and several section workers who boarded with her, to find a building, a teacher, and money to start a school for her children.

In 1885 Charles Randall, only 19 years old, cranked out a newspaper, “The Nebraska Observer” on an old army press. He described the town as having about 100 inhabitants “…of an energetic and social nature,” and noted, a good ten-month school, a Sunday school with library, and several platted additions with free lots offered to anyone who would build upon them.

Because of confusion in 1885 with another town called Antelope, a change of name was suggested. The influence of the railroad can be attested to with the choice of “Kimball.” A friend of the Lynch’s, Thomas Lord Kimball, general manager on the U.P., would sidetrack his personal car and visit them when passing through town. When the area separated from Cheyenne County in 1888, the county also chose the name.

Along with the Homestead Act, railroad lands were offered for sale. Thousands of immigrants were enticed to “go west.” By 1886 Kimball had become a sizable trading center with people arriving on the train daily with their livestock, household goods, and families. The town grew rapidly with new businesses and a fraternal hall for cultural gatherings. Farming was making an appearance in the valley with wheat and sugar beets. There was talk of impounding the surplus waters of the Lodge Pole Creek into a reservoir to be used for irrigation. A district was formed in 1909 for that purpose.

The local economy was boosted by Pat Maginnis’ irrigation flume factory. Later, he built the magnificent flume from Oliver Reservoir to connect with miles of irrigation ditches across the valley. This district, disbanded 15-20 years ago, is now a state recreation area, and circle irrigation is used.

After being named county seat, Kimball built its courthouse in the square and then made a $95 appropriation for trees. Early in 1900 a county-wide high school was proposed. Kimball County High School, the first in the state, opened its doors on January 3, 1910.

In 1922 Kimball became a second-class city and elected a mayor. In 1923 in sympathy with the farmers who lost most of their wheat crop, the town sponsored a free lunch and the hotels and cafes served 960 dinners. This was the first “Farmers Day” which is celebrated annually.

Kimball continued its city improvements, encouraged the farmers during drought years, sent young men to the service during two world wars, survived the ups and downs of the economy, and generally prospered with a population in 1950 of about 1,700. 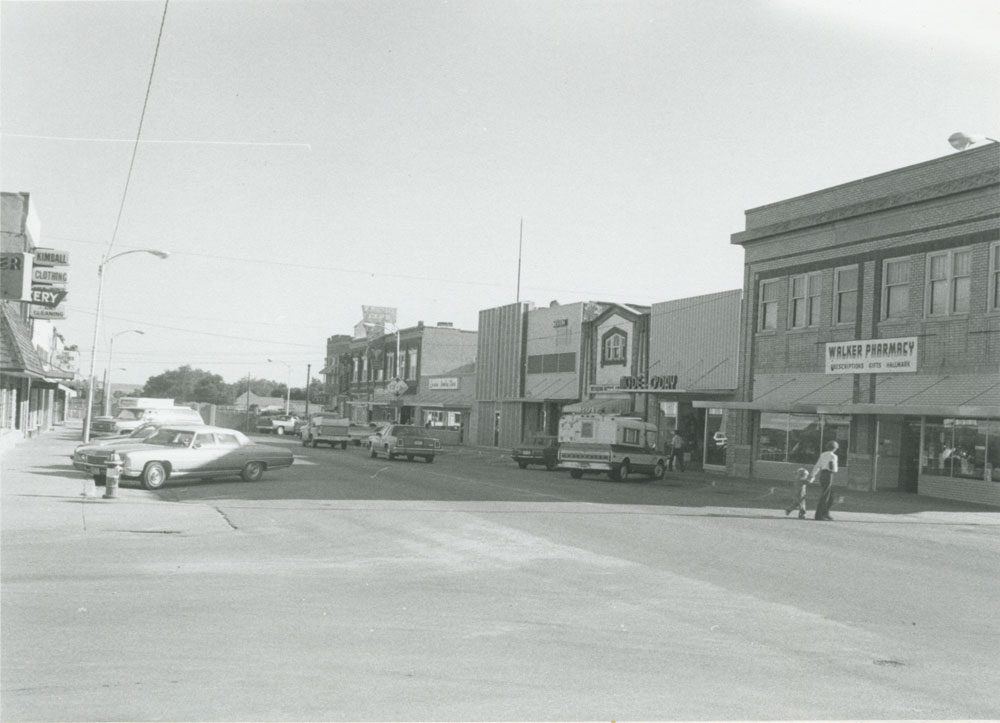 A “second frontier” started when oil was discovered in 1951. This brought hundreds of people to Kimball County. At one time 28 “producers” were operating within the city limits. The town bustled with improvements, paved streets, added schools, businesses, housing additions, and expanded every governmental entity. Within a decade the population was nearly 5,000.

In early 1960, a mammoth hole was dug south of town and residents viewed the huge Atlas missile taken to the site. In the next few years, people swarmed into Kimball as 90 Minute Man launch sites were constructed. The impact, on top of the oil boom, overwhelmed the city as it faced added city services, more new schools, and trailer villages to accommodate the influx of families. The city coped as the population climbed to nearly 8,000.

As Kimball completes its first century, the population hovers at 3,000. Now schools operate with smaller classes, merchants emphasize “home-town-loyalty” and boosterism. Oil activity continues quietly, air force vehicles drive daily through the city streets, and people await the impact of the 25% of Kimball County farmland entered in the Conservation Reserve Program. The “Western Nebraska Observer” continues to observe, inform, and chronicle the history of Kimball and its environs. The Wheat Growers Hotel was constructed in 1918 by F. Cunningham and was considered the “most glamorous Hotel between Omaha and Denver”. Dwight and Mami Eisenhower (with son Doug and Mami’s parents) stayed at the Hotel in 1919. With 86 rooms, a restaurant and a Ballroom, the Hotel became the hub for railroad travelers and locals alike.